Quite often we receive questions about simultaneous translation for traveling, for individuals and companies. As it is not a cheap service, we normally provide this service for multinational companies. The customer must bear the expenses of local or international travel, accommodation in a 3-star hotel or above, half a day for travel days or weekends and a full day for other days, in addition to food and local transportation expenses.

We work with several religious congregations and this month of May we are traveling to Lima in Peru to do the simultaneous translation, using portable equipment, from Spanish into English, of all the beatification ceremonies of Sister Aguchita, a nun who was cruelly murdered by the group Sendero Luminoso terrorists. This is an example that demonstrates how simultaneous translation works when travelling, and also how diverse this type of  work can be.

Peruvian martyr “Aguchita” will be beatified on May 7 in Lima, Peru.

Born in Coracora, Peru, on June 13, 1920, Maria Agostina Rivas López was murdered out of hatred on September 27, 1990. At the time, Peru was suffering from the violence of the guerrillas of the Sendero Luminoso group. The martyrdom of the nun was witnessed by numerous people. In fact, the guerrillas were looking for the mother superior. Not finding her, they killed Aguchita. 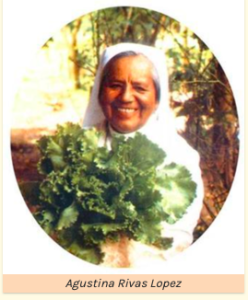 Aguchita dedicated her work to health, education, food supply and literacy, mainly for women, which she promoted through productive training projects, organization of clubs and family catechesis in rural communities in the village of Valle del Yurinaqui, in the department of Junín. The missionary, whose original name was Antonia Luzmila Rivas López, was murdered by the Sendero Luminoso group on September 27, 1990, while carrying out her pastoral mission with the Ashaninka indigenous people, in the central jungle of Peru, in the town of La Florida.

See the documentary about Sister Aguchita at the link