Simultaneous translation English – Portuguese over the internet: I naively thought that the pandemic would end with the year 2020 ……. but it did not end, on the contrary, it worsened throughout Brazil and elsewhere in the world. Throughout the year 2020 I worked from a small hub in my apartment with a cable ethernet line and I had to set up a small circus for each job. As simultaneous translation jobs with Zoom, using the Chicago based Interprenet platform and other platforms were becoming more and more popular, the assembly and dismantling became more and more sophisticated and complicated. Now I was using two computers, an I-Pad, two headsets (plus an additional mono-auricular-headset), an unbelievable electronic paraphernalia. Only one item was missing, which was redundancy in case the internet signal fell or I had a power outage …..

I finally took the decision to modernize everything, installed cable internet with a router in the office with another provider and now have access to two desktops, four laptops, countless headsets, two different routers, two internet operators, in short, everything * state of the art *. To top it off, I invested in a TOP microphone from the BLUE YETI  brand that I insert in this post – super sensitive, this powerful microphone even has an entry at the bottom for the headphones, in addition to being used in the USB port .  Besides the Blue Yeti, I also have four headphones with a microphone from Sennheiser, a well-known German brand of excellent quality ….. 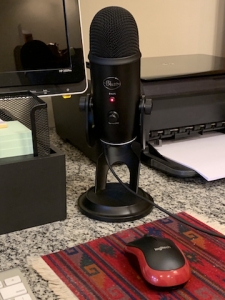 Now nothing is missing to offer quality and excellence to customers, combined with excellent simultaneous translation over the internet from English to Brazilian Portuguese and from Portuguese to English, no matter which platform or combination of platforms !!!

This is the newest acquisition to offer the best in simultaneous translation services over the internet; the latest BLUE YETI microphone.

Send a WhatsApp to 11 9 9934 4647 to obtain a quote for your event; we have several options to offer, and certainly one of them will be suitable to your needs.