We did the simultaneous translation for a very interesting event on pharmaceutical retail (with a simultaneous interpreter). Two American consultants came to Brazil and they told the story of CVS and Walgreens in the United States and explained how the consolidation of the different drugstore chains took place there. Walgreens was bought by the Boots Alliance in the UK and today the entire management of the company is carried out by Boots. Walgreens owns Duane Reade, a pharmacy chain in New York.

The drugstore chain that is currently doing the best in the United States is CVS, they acquired Drogaria Onofre do Brasil. Subsequently it was sold again to the Raia Drogasil Group in 2019

The pharmaceutical retail is one of the few sectors that have registered growth in the country. A survey by the Brazilian Association of Pharmacy and Drugstore Networks (Abrafarma) showed that the networks associated with the entity (26 groups in total) earned R $ 35.94 billion in 2015, 11.99% more than the previous year.

If there is a growing consolidation of large groups, what about small independent drugstores? (Note: The simultaneous interpreter did all the simultaneous translation of the event – it was 4 days of work at the Transatlantic Space on Rua José Guerra at Granja Julieta in S Paulo.

I would like to take this opportunity to mention that I have not worked in such a pleasant and professional environment for a long time….. The Club itself is separate from the events area – the food buffet, both during coffee breaks and for lunch,  was absolutely perfect. Fresh fruits, variety of cakes, sweets and snacks, assortment of different foods, really a pleasant experience;  I recommend the Transatlantic Club Space in São Paulo for your event, they have amazing food and service! 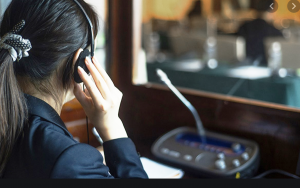 While the large chains have continued growth despite the recession, the independent and small companies lose, year after year, a slice of the only area that is growing in retail. Since 2006, the market share of small drugstores, both relative to the amount of stores and  the sector’s total revenue, has been decreasing . According to information shown in the presentation to investors, based on data from Abrafarma, from 2006 to 2014 the participation of small drugstores in the total of stores in the sector decreased by 6.2 percentage points, from 91.7% to 85.5%, throughout the country. A similar movement occurred in relation to total revenue. In 2006, the participation of independent drugstores in sales was 59.9% and 8 years later the number dropped to 47%.

What did I learn? For any business, even in our simultaneous interpreter in Brazil business, you always need a strategy. And a strategy is not a fixed thing, it evolves and you need to keep an eye on the future; any small change can mean a huge loss, so it is always necessary to pay close attention to the market and update its vision and mission.